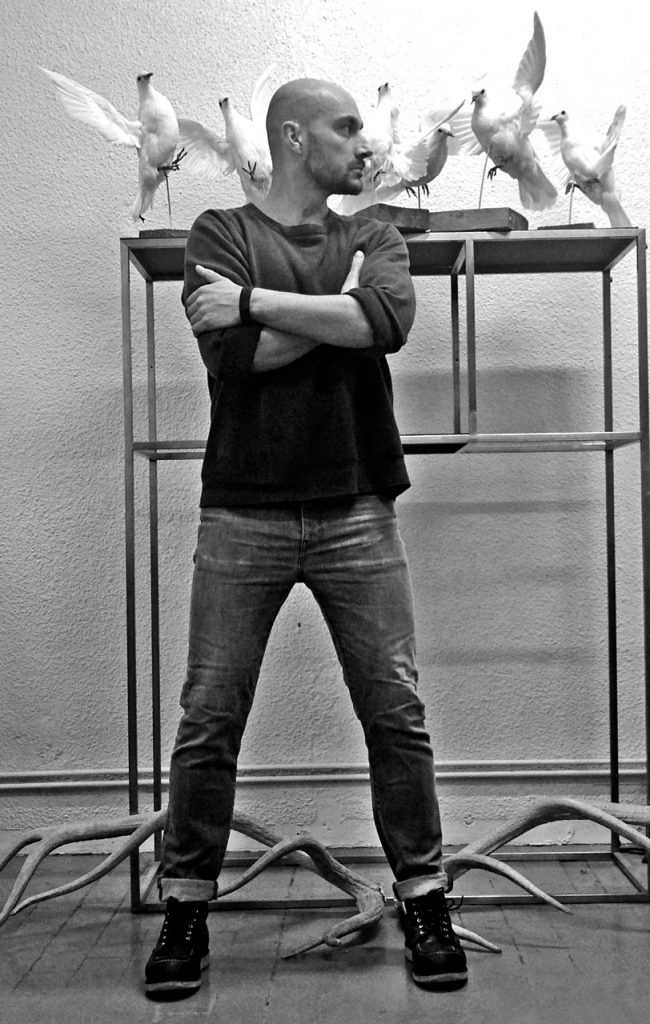 MATHIEU MILJAVAC is a Paris-based artist whose work questions our relationship with everyday and ordinary animals, especially pigeons.  His pieces create a new appreciation of the way in which these totem animals can trigger emotions in us, converting relatively negative attitudes into fascination – through the alchemy of his work.  Mathieu’s work in taxidermy is an evolution of nearly 20 years of creativity in other adjacent industries : fashion, haute-couture, graphic and floral design.  In 2009 he studied taxidermy in Scotland under George Jamieson.

His work has been exhibited in Paris at the Musée des Arts Décoratifs, L’Eclaireur, and Galerie Da-End. He has been featured in various publications including Beaux-Arts Magazine, Télérama, Elle Déco, Marie-Claire Maison and Challenges.

Were you creative as a child? What were your first creative impulses?

I was, yes! I remember writing little poems that were inspired by my teachers. I loved drawing although I wasn’t very good at it. I had a very vivid imagination, lots of imaginary friends and I could spend hours alone in my own little world. And I used to dance a lot as well.

You chose to pursue taxidermy after reading about it in a magazine, seeking out training courses abroad in Scotland to learn the craft. What was it like to jump from your past career in fashion and design into this unknown world of a relatively niche art form?

I guess at this time of my life, I needed to find my very own way of expression. I had indeed worked in fashion, in graphic design, and even in flower design, but none of them had satisfied me in terms of self-expression. When I came across that article about artists using taxidermy in their work, I knew instantly this would be part of my future. I had rarely felt something as strongly as that. When I went to Scotland I really had no idea where it would take me. I fell in love with it all after literally 10 seconds at the work bench and knew I was right about it, although it quickly became a medium rather than an end in itself.

Scotland was only the beginning. I learned the techniques there but it took me 5 years to really develop my own approach.

Traditional taxidermy tends to be still, motionless in a way. My work is the opposite. I believe in movement, in freedom, in flight. Everything I do is about trying to create movement, life and lightness.

It is a relatively niche art form, but I sell my pieces to a wide range of clients. Some of my work consists of big installations and suits big venues, others are much smaller pieces for the home. 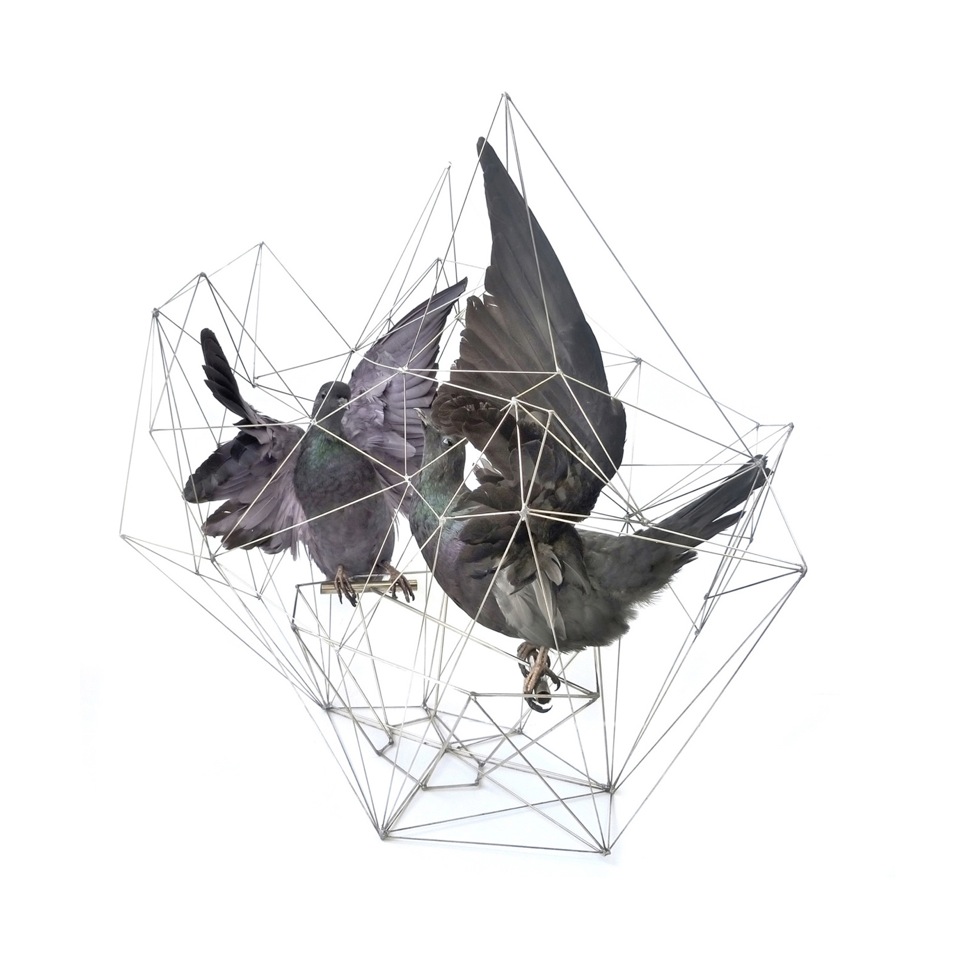 On that note, this attraction to taxidermy presented itself to you in what you called a “revelation.” While you create, do you find that other ideas or directives present themselves to you as revelations?

It really was a revelation, yes! It’s slightly different when I create. I am extremely focused when I am at the work bench. I need to be fully present with the animal, as a way to accompany it through its transformation.

Ideas, even though I constantly think about new pieces, tend to reveal themselves after a physical effort. I had my strongest ideas right after my morning runs for examples, or after my yoga practice. I find it fascinating how ideas emerge. You gather inspiration in various forms, whether you are aware of it or not, and all of a sudden something emerges from it. Contemporary dance is a huge inspiration for me. I am fascinated by the movements choreographers are able to create, and how they convey emotions through them. Pina Bausch, Trisha Brown and Sidi Larbi Cherkaoui are among my favorites.

What I have realized is that there are 2 different forms of inspiration. The first one is the intention. It’s a conscious idea, and it manifests itself at the beginning of the work. For the “Burst” series, I wanted to make the birds look like a big bunch of flowers, an explosion of pigments. The second one is the intuition. It appears while you are working or even more often after the piece is achieved, and it’s a more of a subconscious idea. It’s hidden there, somewhere in your mind, waiting for the right time to reveal itself. It’s the hidden meaning of the piece, the intimate part of yourself that you have put in it. I often become aware of that part when I am looking for a name for the piece.

I remember that when I finished the first “Burst” in red, I simply couldn’t look at it, it was too overwhelming. Something had happened in the process — I had put something in it without being aware of it. It took me a while before I could physically look at it.

My clients mostly buy the pieces as they are. I guess the part of myself that I put in my work resonates with them. Sometimes they have a precise idea of what they want, and I kind of become the vessel of their own inspiration. But at the end they always let me have the last word in terms of aesthetics. 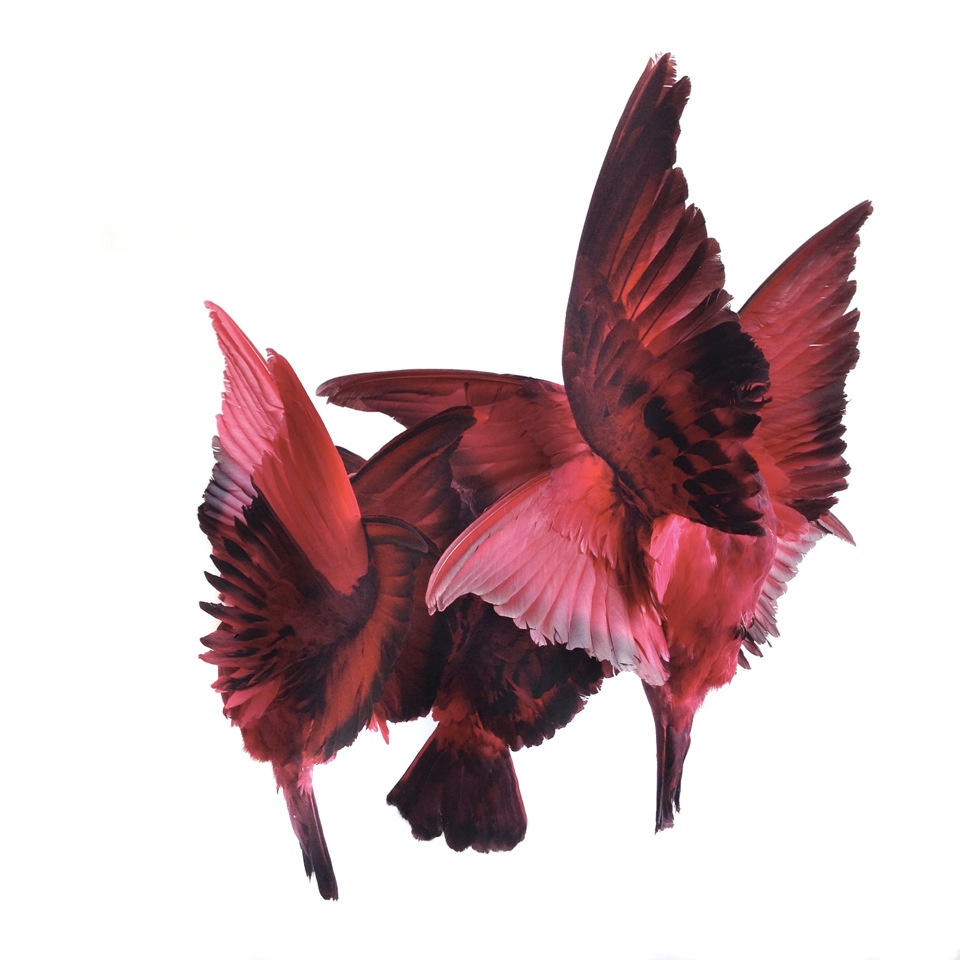 By using common animals like pigeons and rats, your work often revolves around the idea of turning the ordinary into the extraordinary. Was there a moment that changed your own perspective on what we typically see as ordinary or banal?

I believe that rather than a precise moment it was a subtle shift from reality to extraordinary. In the same way that in his novels, Murakami takes us very cunningly from the real world into a parallel one. I realized with time that my work is about escaping reality, and turning it into a more beautiful world.

My work is similar to alchemy, in which there are 3 main phases: the first one is called Nigredo and is about dissolving. This is the moment when I skin the animal and remove the organic parts of it. The second phase in alchemy is Albedo, and it’s about purification. That’s when I wash and treat the skin of the animal. The final phase, Rubedo, is about recreation. For me it’s the magical moment when I bring the animal back into shape, giving it its final movement. So just like alchemists turn lead into gold, I turn pigeons into extraordinary birds. It’s almost as if I was helping them reveal their full potential. Their idem gem.

One of the most moving moments I experienced was when 3 of my pieces were recently shown at the Musée des Arts Décoratifs. There was something extremely beautiful in having some of the pigeons we normally see in the streets being shown as pieces of art in the museum. 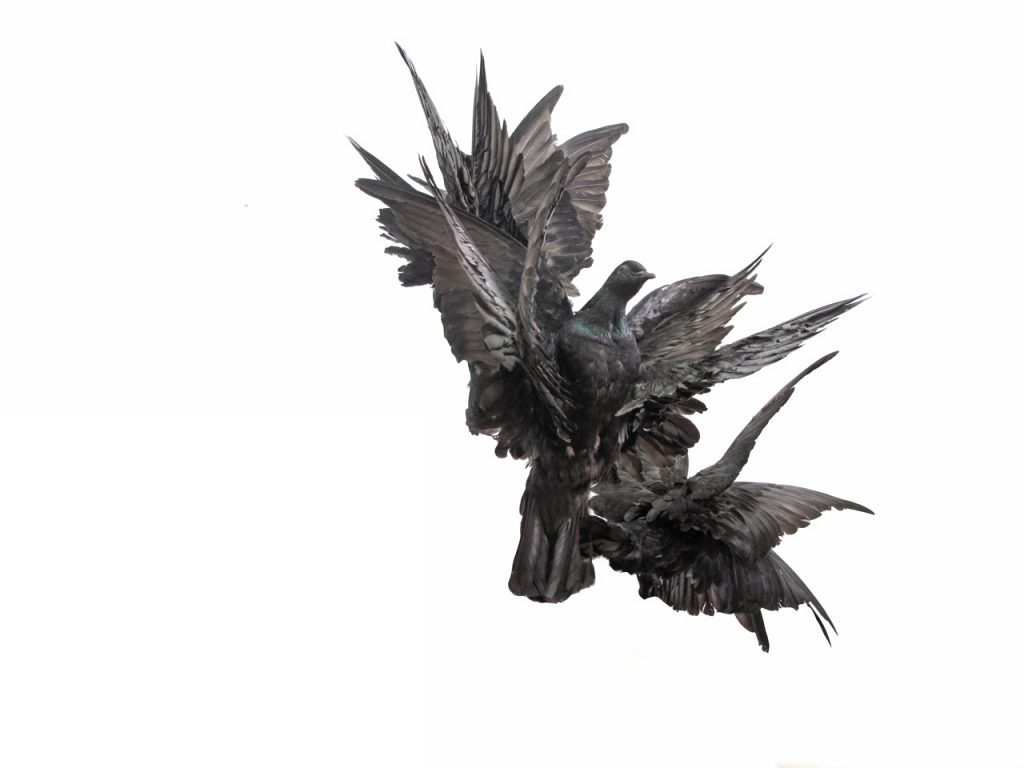 Your taxidermy teacher said that you “can try to imitate nature, but you’ll never be as good as nature.” How do you think this knowledge of your inherent imperfection changes the way you create, and even the way you live?

Well, it’s a wonderful motivation! In creation and in life. You have to try to improve yourself, as an artist and as a person. As an artist, you want to be able to express as closely as possible what you have inside. And each creation is a way to get closer to that. Each piece is an attempt to express yourself more precisely, more sharply. And each one is the expression of a small part of who you are. It’s the same thing as a person. When you realize what your imperfections are, you can start working on them. Not to become perfect, but just a bit better.

You’ve said that you try to capture the essence of an animal in choosing its pose and shape. How do you discover and interpret this essence?

That’s a very special moment for me. Before I start working on the animal, I spend some time with it, opening its wings, bending its legs, turning its head, etc. It’s a physical communication between the animal and me. I know it will sound weird, but it’s almost like we are talking to each other. And we both decide what the pose will be. For me, the animal decides as much as I do what the pose and shape will be. 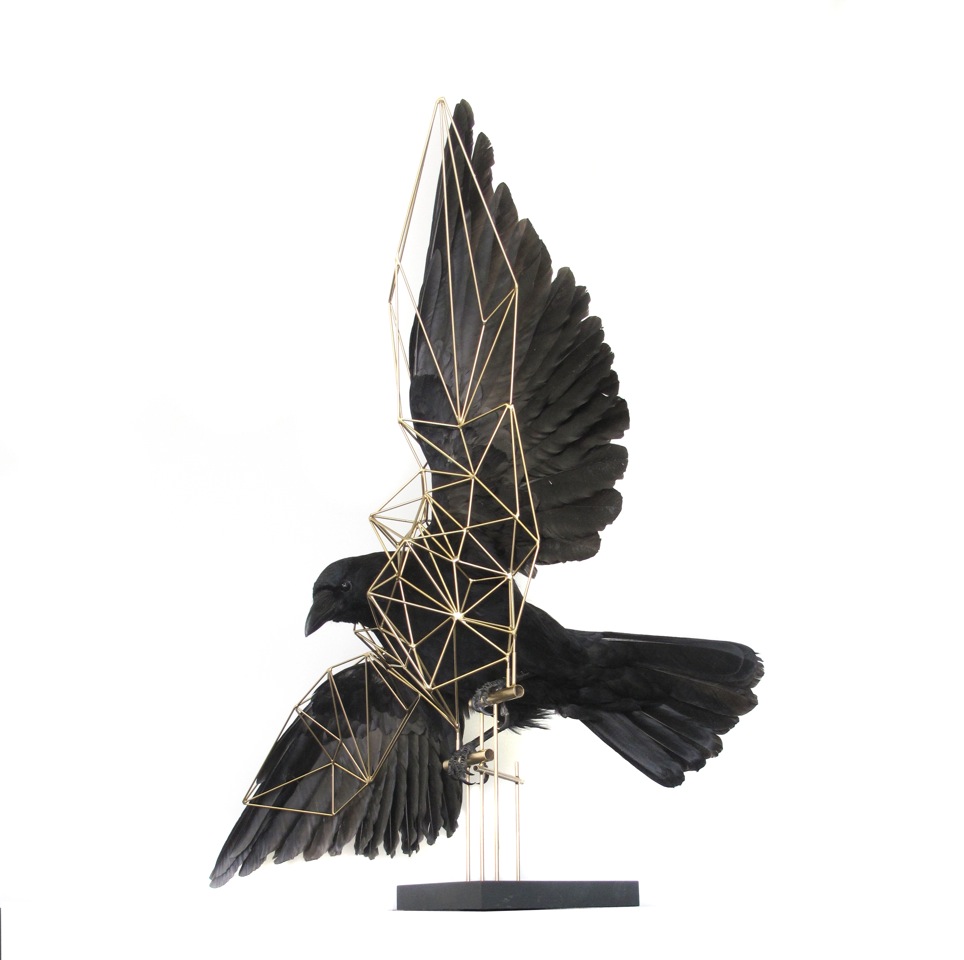 How has this art form altered your view of and relationship with death?

As strange as it sounds, I don’t see death in what I do. At all. It may be because it has become a big part of my life, or because you do need to somehow disregard it when working on dead animals. I have never been scared by or obsessed with death, I have always considered it as being a part of life. If anything, I think it has made death an even more abstract notion to me. What I have recently realized is that death is just a state of non-being. Our finiteness may be scary for some people, I just think that it is fully part of life.