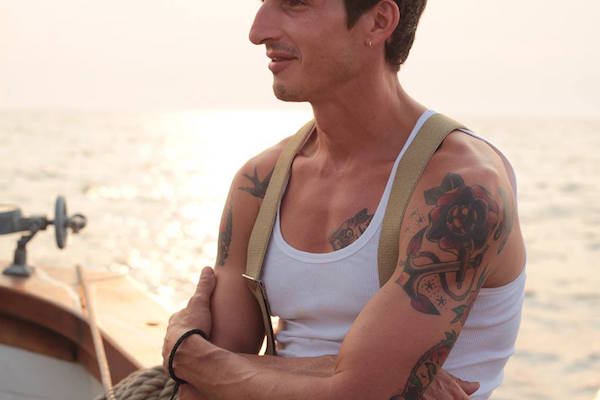 Capricious and volatile, the sea

NICK TABONE works on tall ships and in the film industry. He will appear in director Ron Howard’s upcoming film In The Heart Of The Sea based on the book by Nathaniel Philbrick.  He divides his time between Europe and Canada. He likes words.  Occasionally he writes them down.

Nick’s story and life choices inspired us so much that we invited him to write a personal essay for our Chronicles section. This section is the most ‘free-form’ and unformatted of our magazine. It suits him well. Enjoy this terrific read: 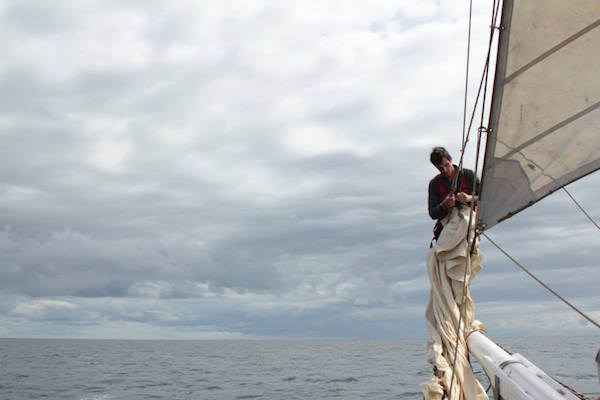 *note: all the photos featured in this article were taken during Nick’s other voyages throughout the years.

We’re two days out of Bermuda and bound for France when we get slammed by a hurricane that is not supposed to happen.  Our weather router had predicted winds of up to 40 knots, a good blow but nothing this old Norwegian square rigger can’t handle.  We have a conservative sail plan:  one headsail, two square sails on the fore mast and two on the main.  Suitable for the predicted conditions, however, when I come on watch at midnight it becomes clear that the forecast was woefully inaccurate.  The anemometer in the chart house reads 59 knots, 4 knots shy of hurricane force.  And it’s building.  The watch officer and I exchange worried looks.  The captain is summoned.

Just as he comes up from below a large wave swamps the well deck.  Hundreds of tons of water sweeps over the rail; so much that our scuppers (the holes in the ship’s side where sea water escapes) are overwhelmed.  It takes a long time before it disperses. It sluices back and forth across the deck in thrall to the ships movements in the mountainous seas.  The captain decides that the conditions are too dangerous for the trainees and they’re sent below for the remainder of the storm.  It will just be the ten professional crew on deck to deal with whatever arises. 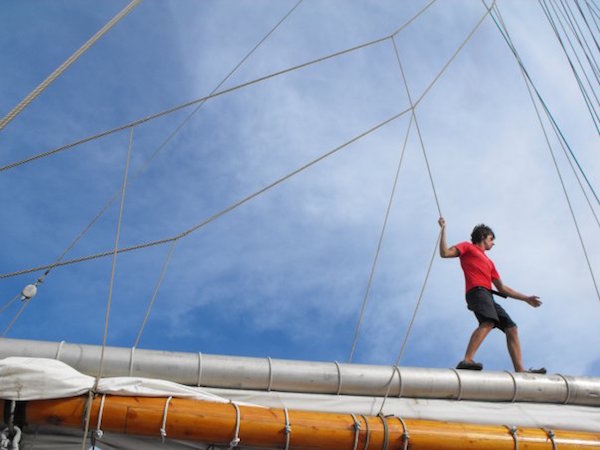 The ship was built in 1927 in Norway.  It is 205 feet long with a displacement of 500 tons.  It is one of the oldest working steel, fully-rigged ships afloat …  It’s a sail-training vessel.  Our crew is made up almost entirely of teens between the ages of 15 and 19.  It is their job to perform the day to day tasks that make up the running of a big ship.  This consists of galley duty, cleaning the heads (toilets) and making sure all the living spaces are spic and span.  They must also participate in basic maintenance – rust busting, painting, varnishing – as well as standing 4 hours of watch everyday.  Add to that 6 hours of high school classes and you have yourself a pretty busy schedule.  There is satellite internet out here but it is reserved for only the most important of correspondences and generally the providence of the captain and chief mate respectively.  The students and the crew are forced to revert back to a world of conversation and books and okay, watching movies on their laptops.

I find that people are drawn to a professional life on the water for different reasons.  Often it is down to where they come from, a family tradition or simple economy.  For some there is a romantic allure, and I suppose I had a bit of that 25 years ago when I started working on tall ships.  It was soon dispelled when I saw how capricious and volatile the sea can be first hand, and I realized what hard work it was.  Nonetheless, since that first foray, at various times, I have been drawn back into the life.  It is like a drug.  After long periods ashore I begin to feel an palpable need to get back on the water.  When I tire of the rat race, the riff raff and the constant to-ing and fro-ing of shore bound existence, like Ismael in Moby Dick, I figure it’s high time I return to the sea. 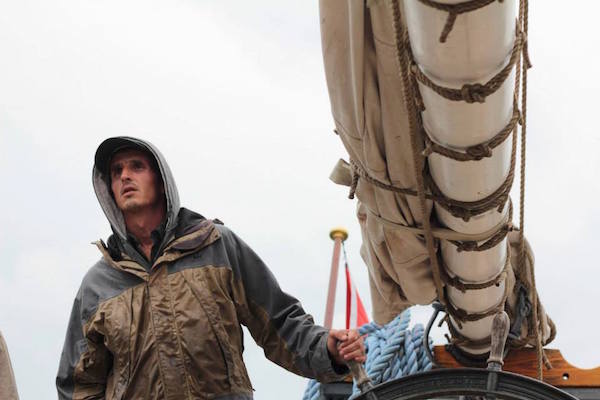 Life on the water is simple.  It all comes down to one thing.  The ship.  Once the mooring lines have been cast off, or the anchor raised, I feel a conscious unburdening.  No more can I check my facebook account 236 times a day, or receive tweets or texts or horrifying images from BBC or CBC news updates.  It’s as though the ship and her crew become their own planet plowing a furrow through the vast universe of the sea and all of the world’s goings-on disappear.  The only thing that matters are the sails and the miles and miles of rope and running rigging that keeps them set and the ship underway.

It’s now gusting upwards of 70 knots.  We are holding too much canvas for this.  The rigging shrieks under the duress, and the sound of this and the wind and the seas is deafening.  It is pitch black.  I can barely see my hand in front of my face.  Normally on even the darkest of nights one can make out the shapes of the sails above but tonight there is nothing, just a black howling void and the relentless sideways rain.  I have been in similar conditions before, but I’ve never been in a position where we are carrying so much sail in such strong winds.  I feel fear knot in my stomach.

In better visibility we would immediately strike the upper sails.  This involves climbing the masts and laying out on the yards up to 110 feet off the deck and tying the sails down tight.  The captain has decided that it is too dangerous in this wind and limited visibility.  We will wait for daybreak.  Until then all we can do is wait and see if the rig will take it.

It can’t.  There is a deafening crack and a maniacal, rhythmic cracking sound, like some celestial record player has hit a scratch in the vinyl and is skipping continuously.   The main topsail has literally exploded and what’s left is flogging itself into ribbons.  Next it’s the inner jib.  We can hear its sheet tackles thudding against the hull like blows from a sledgehammer.  Imagine the sound a flag makes on a windy day, multiply that by a thousand, and you have a vague approximation of the sound a blown sail makes in heavy winds.

‘God’s taking in the sails,’ remarks the boatswain.  We are all huddled in the lee of the chart house.  It is an experienced crew.  Some of them have even survived the sinking of other ships in similar conditions.  The mood is as light as it can be.  Jokes are told, or rather shouted inches from the recipients ears.  But mostly we are quiet.  And we wait.

As the sun comes up we prepare to go into the rigging to take in what remains of the blown sails and the sails that have made it through the night.  Somehow the fore coarse, a massive piece of canvas, is still holding on.  Eight of us gather at the foremast and begin donning our harnesses.  The wind is now peaking at 79 knots.  It occurs to me the frivolity of so many of the banal status updates and photos people post on Facebook.  A picture of a meal, or a comment about how hard someone is working, or how tired they are, or the cough that their toddler has or how frustrating it is getting a plumber on a Sunday.  And here we are, eight of us, in the middle of the Atlantic, in a hurricane, preparing to climb 60 feet up a mast to wrestle a sail.

Climbing the ratlines (the ladders that go up a mast for climbing) in this weather is like riding a crazed bronc.   The ship bucks and pitches in the seas and the wind speed increases the higher you climb.  Just as we lay out across the yard side by side, the sail finally gives up the ghost.  It rips from seam to seam and suddenly it’s billowing upwards pushing us off the yard we are on.  There is an old nautical adage that goes one hand for the ship and one for yourself.  Good advice but impossible right now.  We have to punch the wind out of the sails but it is like hitting a pulsing, breathing wall.  I am sweating, using every available ounce of strength I have left.  Finally we are able to wrest the wind out of it and lash it firmly to the yard.  One by one we climb off the yard and make our way down the ratlines.  Seas are still swamping the well deck and at times we are standing in water up to our waists.  We are cold, tired and hungry, but there is much more work for us to do.

None of us sleep for the next 24 hours.  Slowly and methodically we take in the remaining sails.  In conditions like these even brushing one’s teeth is a tremendous exertion.  Later, as I climb down the mainmast, having taken in the last sail, I am spent.  Barely holding on.   Those of us not on watch are dismissed to our bunks and I think of it longingly, even though I know that with the ships motion being what it is, sleep will be near impossible; but I don’t think I’ve ever been this tired, and I’m going to give it the old college try.  I walk through the students accommodation.  It is swelteringly hot and there is a smell of vomit and unwashed bodies.  The students huddle together on the benches that  line the area.  Some of them are green and a few look frightened but for the most part they seem to be taking it remarkably well.  The third officer who is with me asks a cluster of the teens if they believe in God.  He doesn’t wait for a reply and chuckles as he staggers off to his bunk. 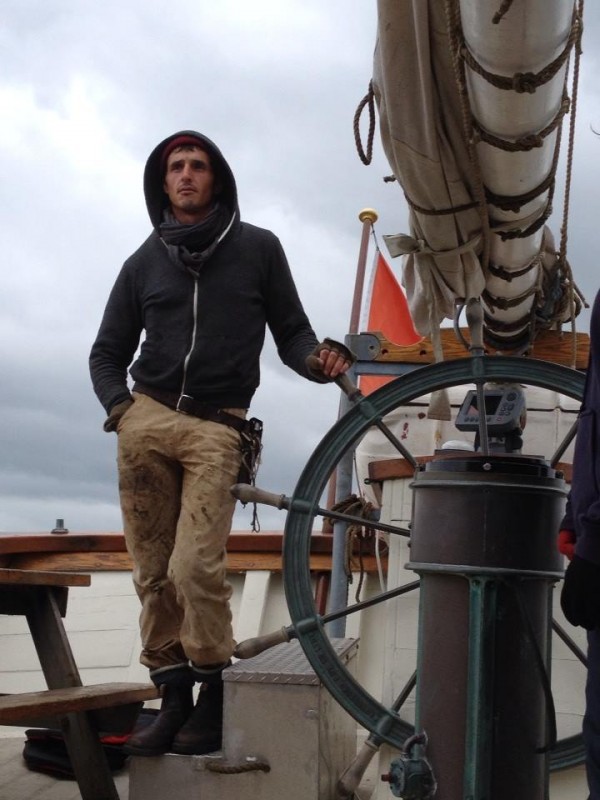 The remainder of the voyage is uneventful.  After a few days the seas lay down and the daily routine returns to normal.  The wind shifts to an inopportune direction and we are forced to motor for the next 3 weeks.  We arrive in Brest, France after 26 days at sea.  The pro-crew go out and get good and drunk that night.  Conversation often turns to the storm, indeed it will do for the remaining month we have together.  I have forged many strong friendships on this voyage, and the hurricane has made us closer and created a formidable team.  For hundreds of years people have done what we have just done and in much the same way.  The technology of these ships peaked somewhere around the late 1800’s and has changed little since.  I am proud of this fact and the tradition that lies in what we do out on the sea.  Perhaps I am ill-equipped to cope with the pace of modern life, at times I feel this is so.  On the water I’m far removed from the world of transit delays and operating system updates and the unveiling of the latest smart phones.  This experience was mine and those I shared it with.  It wasn’t digital or downloadable.  We felt it, and smelled it, and saw it, and breathed it.  I recall it frequently and down the line when I am reunited with various members of the crew we’ll share a drink and speak of it fondly.

No one did post any pics on Facebook.  We didn’t take any.  We were having a fucking adventure and just didn’t have the time. 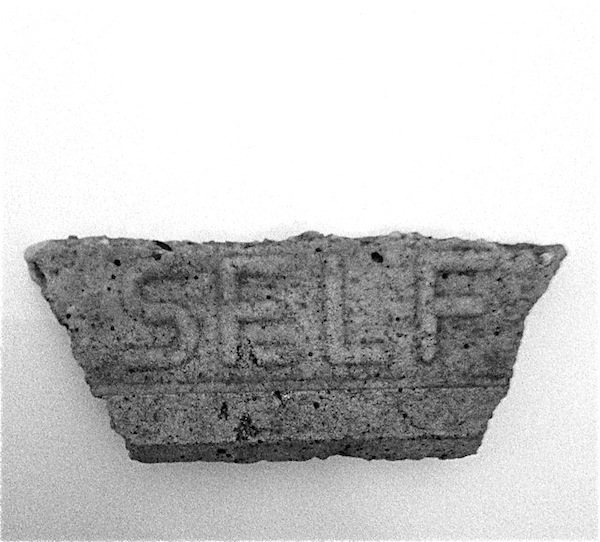 A Sketch for Nothing 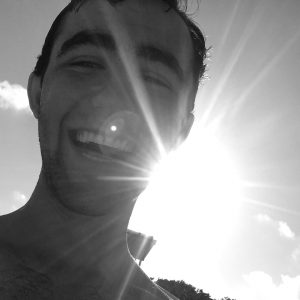 What If? NOAH RENNERT