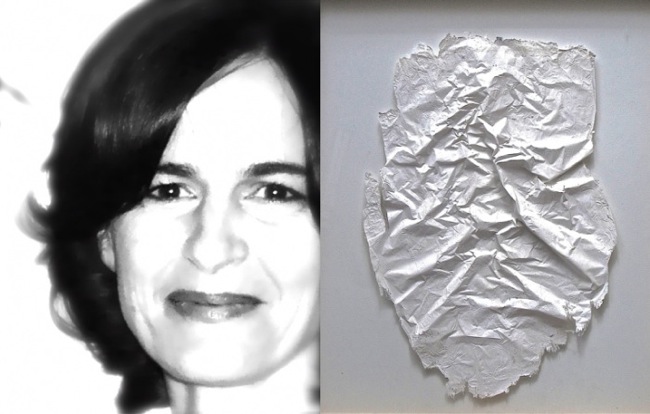 VICENTA VALENCIANO creates paintings that have cast away any solidity, they exist with no support, canvas, wood or paper. Vicenta’s Liquid Painting was born from the necessity to express the new characteristics of modern society. The work is free to adapt to any shape, or can just be hung on its own. The back of the painting is exposed, showing the initial drawing and the first brush strokes. Strongly influenced by philosopher Zygmunt Bauman, who describes our modernity as having moved from a solid to a liquid phase, a constantly changing society which has lost all solid references and become more adaptable and fluid.

Born in Mallorca,  Vicenta initially pursued her love for arts and mathematics by training as a Civil Engineer, before studying Fine Arts at the prestigious Central Saint Martins College of Arts and Design in London from which she graduated in 2005.

She has exhibited at the OECD in Paris, Art Sunday and Sofía Gaspar Spanish Contemporary Art in Hong Kong, and at the Jardín Luminoso in Buenos Aires. 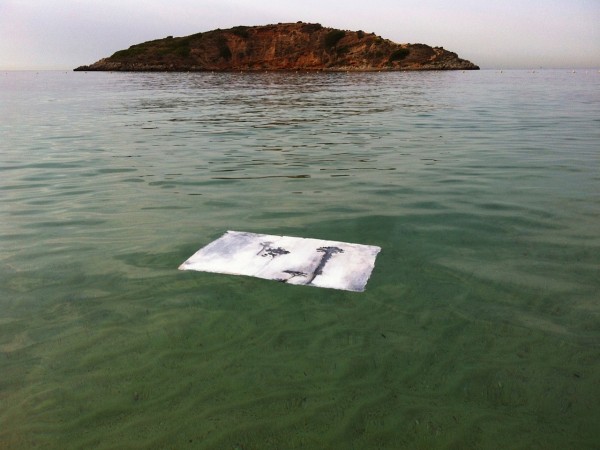 What was the first ever inspiration that initiated your artistic direction?

As far as I can remember, I’ve always had an impulsive urge to create things, to change things I had, to rearrange my surroundings in my own way. I became more aware of it in my teen years, but my parents didn’t agree with my idea of studying fine arts so I went on a science pathway.

The notion of Liquid Painting came during the painting of “Je produis, je manipule, je contrôle”, when I had almost finished it. It is quite a big painting, and I was pretty tired of doing all this layers and layers and layers. It took me months to finish and as I was adding layers I thought the painting looked different every time, and never how I wanted it to. It was the thought of all this layers coming off and all these to represent the same figure, that gave me the idea of separating paint from its support. 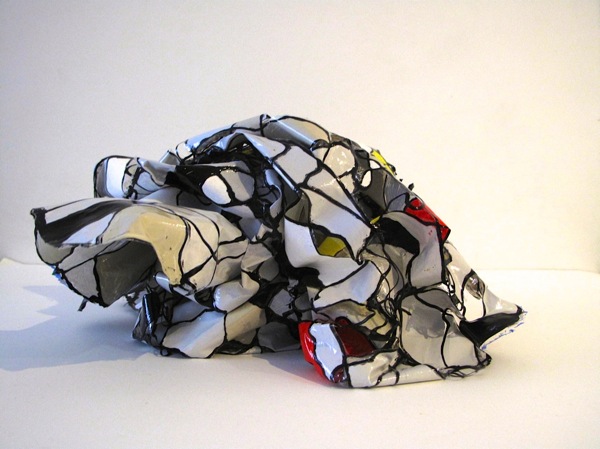 You had been working on installations when you discovered liquid painting. How did this come about?

I had been exploring the fine line between two and three dimensions in some previous installations, but I had left it aside to start painting. I was looking for something I couldn’t define. The physicality of Liquid Painting began during the process of painting “Je produis, je manipule, je contrôle”. At that same time I was reading about contemporary sociology and philosophy, and I came across the definition of “liquid modernity”. It was like a spark, suddenly my two worlds came together. And so the experimental phase began. 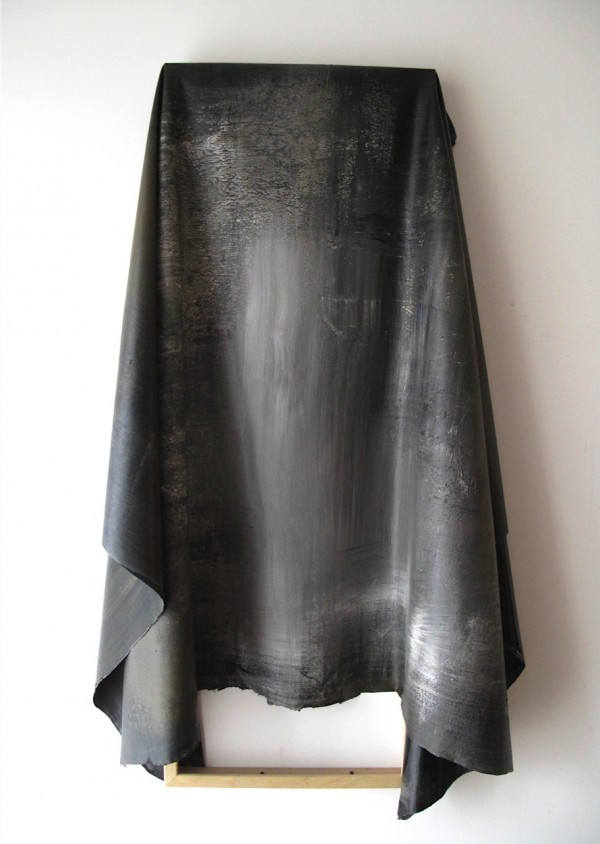 How do you see your use of science, of innovation, in your creative process?

My background in science forged me into a methodical and process-control artist. I tend to do lots of thinking over an idea before I start the experiment itself. I analyze ideas in my head rather than spontaneously work on something. But the analysis works to a certain point, once you have started to paint, no matter how much you want to be in control the outcome is unpredictable. The painting changes shape from when the idea was first conceived, and even the idea changes with the painting. Also in the process you discover little things that develop in front of your eyes, and if you want to take them further you start analyzing in a more conscious way. Then you go back to painting, and discovering more things to take forward and analyzing, and on and on.

What has been your most recent inspiration?

Motivation comes from my surroundings. Our society is my muse, our ways of life and order, of behavior. It’s the reason for liquid painting, and is reflected in most of my topics.

Are there any major influences in your liquid painting, what do you aim for in your experimentation?

The concept of liquid modernity started it all, especially the idea that we live in an ever-changing society, and that we have to become flexible and adapt to its ever-changing conditions. So I thought I needed to reflect this in painting, making a paint that looses its solidity, meaning the support. A paint that is flexible and free to adapt to any surface. A paint that is on its own and can only hang, rest or bend by the power of its own ability. A painting that also reflects the dilemma of security and freedom, because loosing the security and solidity of the canvas, and gaining its freedom, has made it fragile and delicate. 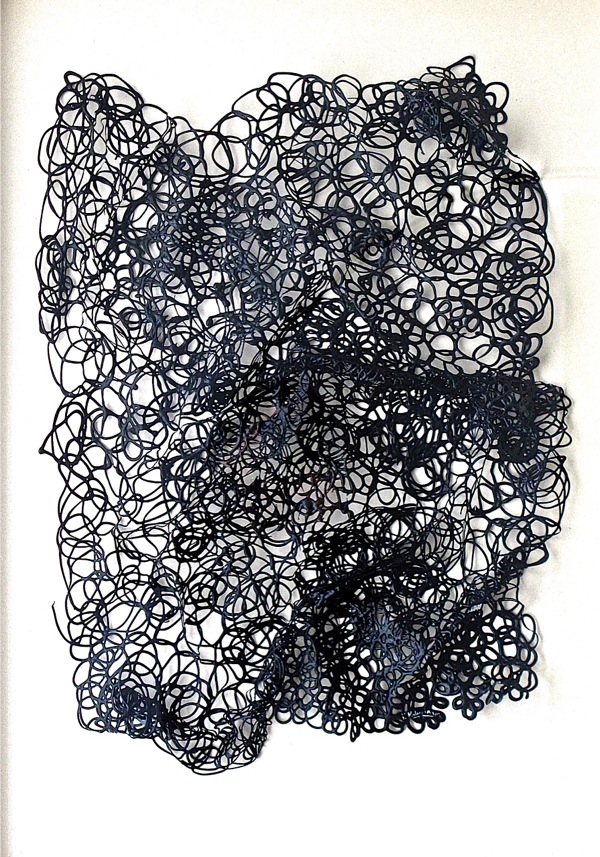 Once you’ve chosen a subject, what is your creative process?

I write, I read and I search, in no specific order. I find key words that start an image in my head, and then I have it. I take some photos if it’s going to be figurative, and I start painting. I never make any sketch. Sometimes I write my ideas on a paper or notebook so as not to forget them: sometimes ideas come so fast you can miss them, so you need to write them down and analyze them.

So could one say you follow your subconscious? Or is it also an intellectual exploration of your imagination, manipulating and playing with concepts?

I cannot follow my subconscious because I’m conscious when I’m working. It’s true that ideas and images pop up suddenly, but I don’t know where they’re coming from; anyway, as soon as I focus on them I am consciously analyzing them. I guess one can work one’s self in a kind of “trance” and be less in control of one’s actions, but I believe it will be your unconscious “at work”, or an actual inability to be aware of your movements and thoughts, or both? I make an imaginative exploration of intellectual concepts, which I guess is perceived by my conscious and unconscious at the same time, which then is thrown back and forth in between them until an image pops up. 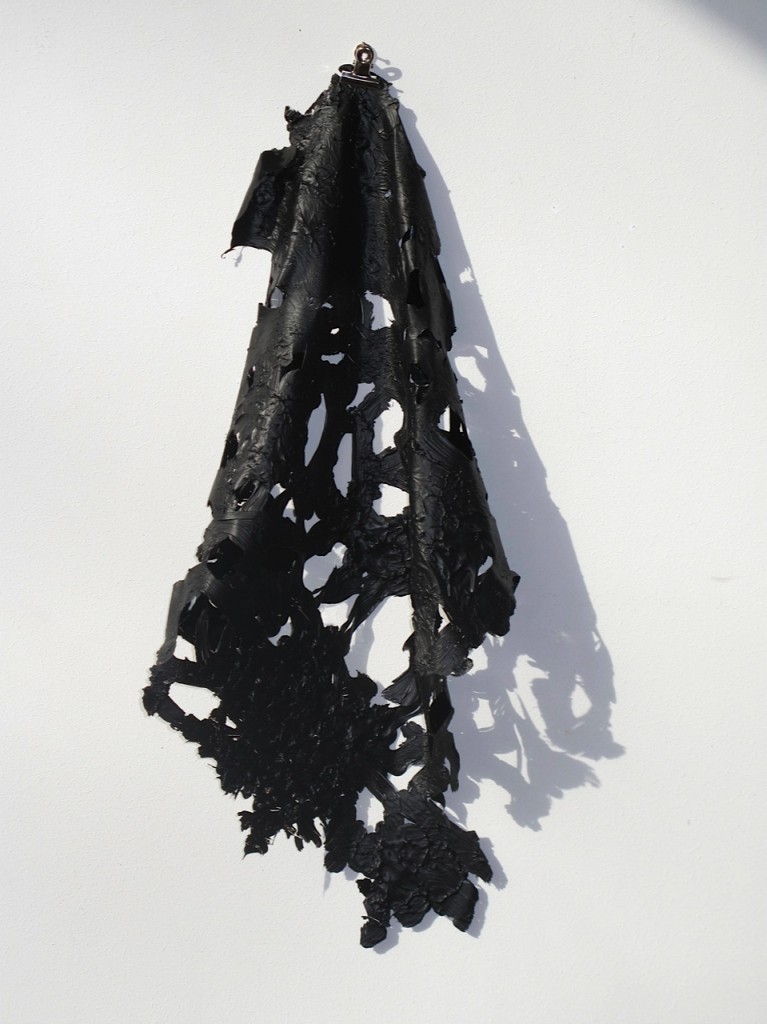 When do you know a piece is ready?

I don’t know when it’s ready. I work on a piece until I find there’s no point keeping going or until it hurts. I find painting a bit obsessive and unhealthy sometimes.

How do you feel when you are in the midst of creating? What context do you need to put yourself into?

I need to have two different phases: the productive one, where I need to feel high, I like to feel sharp and agitated. I drink tea and coffee!…; and the genesis of ideas, at its peak at twilight or whenever I’m in between awake and asleep, too tired to work but relaxed enough to let images pop freely. Ideally I need to be alone for long periods of time.

How does your work, your creative approach influence your daily life, your choices in life?

Right now it governs my daily life and invades my personal space, which is in fact my choice in life. My living room looks more often like a studio than anything else. I feel it’s unfair for my family sometimes, but they don’t seem bothered and support me 100%.

What are the major obstacles you must overcome in your work?

The fragility of the paint, which is also an interesting aspect which I’m about to engage in my experimentation.

Have you got any masters?

I find many artists from very different backgrounds very interesting for their variation in approach to art and aesthetics. From Goya, Velázquez and El Greco through Barcelo, Tàpies and Cy Twombly to Damien Hirst and the YBA , there are things to learn and explore in all of them. 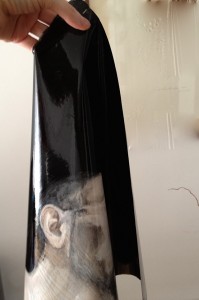 Paint: I’m studying the possibilities of liquid painting as a material. I’m still experimenting about its properties and limitations. I fold it, bend it, wrinkle it, glue it, stretch it, and break it. I also want to push the boundaries a bit more and let liquid painting to gain some more “freedom”. I’m right now experimenting with this “supplement of freedom” I’d like it to acquire.

A case for exploring your creativity