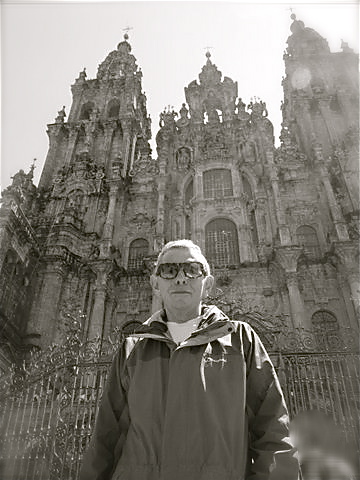 STEPHEN MANGION is an architect & civil engineer. Stephen has designed and managed various major projects including commercial, residential, educational, industrial and hotel buildings, as well as a variety of medium and smaller projects. Mangion, Mangion & Partners is a Malta based multidisciplinary architectural practice.

On May 3rd of this year, Stephen undertook The French Way/Camino Frances the most popular of the routes of the Way of St. James, the ancient pilgrimage route to Santiago de Compostela in Spain. The overall length of the Camino Frances is just over 800km. He undertook the “Route Napoleon” across the Pyrenees Mountains with a climb of 5,000 feet. Stephen walked for 28 days.

At Seymour, we feel that the creative process can be experienced as a quest, a journey, a search for truth, self expression & perhaps even a subconscious effort to edge toward something numinous. We were fascinated by an architect setting off on a modern day pilgrimage and jumped at the opportunity to ask Stephen some questions about his journey.

What initially inspired you to undertake this pilgrimage?

The first time I heard about it was when I read Paolo Coelho’s book, The Pilgrimage.  Subsequently, I met some people who had walked it and who made it sound quite magical.  Later still I saw a movie about the Camino “The Way” which brought it to life and which encouraged me to read several books written by pilgrims who had walked it.  After that, I was completely hooked and I started planning it quite seriously. 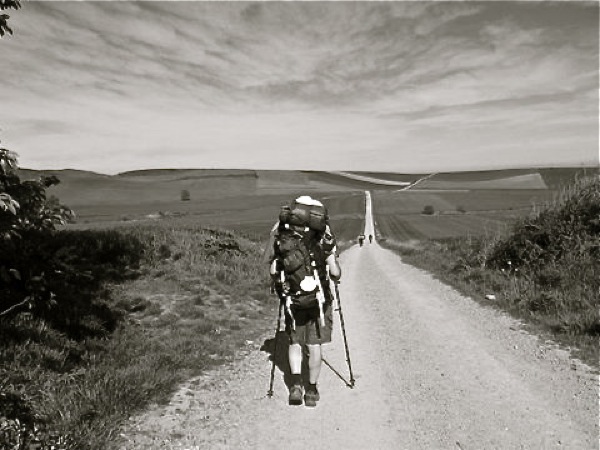 Please take us through the schedule of a typical day.

I usually woke very early – around 5.30 a.m. – firstly because I always get up early – but also because when one is staying in the albergues (hostels), there are very limited bathroom facilities for the 50-100 people staying there so I tried to get in first.  I would then pack my rucksack, fill my water bottle and generally start walking between 6.15 and 7 a.m.  I would walk for about eight kilometres (about one and a half hours and stop at one of the villages along the way for breakfast.  Breakfast would typically be tortilla de patatas (potato omelette) and jamon (ham).  After half an hour I would set off again and walk till lunch time, then stop for lunch in a town or village.  Lunch would take longer – say an hour and a half, although when it was hot I would wait even longer before starting to walk again.  I would then walk till I reached my destination for the night.  This varied a lot – there were days when I walked as little as twenty kilometres and days when I walked forty.  On the shorter walks I would get to my destination easily before lunchtime while with the longer walks I would sometimes arrive as late as 6 or 7pm.

If one was spending the night in an albergue, one tried to get to one’s destination as early as possible because it’s on a first-come, first-served basis (although there are cases where you can book your bed or room ahead)  When I got to my destination, I would shower, get my walking shoes off and put flip flops on and relax: sip a glass or two of wine, talk to friends I had met on the way, walk around the village or town and, in many cases, go to the pilgrims Mass. There would be the cena de peregrinos (pilgrims’ dinner) usually around 8pm and then, if one were staying in an albergue, you would have to be in bed by 10 as lights went out at that time.

It was not an entirely new feeling to walk in silence.  I go walking every day for about one hour in the early morning but this was different.  Very often I would start before sunrise and there were times when I would walk for two or three hours without seeing anyone else.  The silence and peace was accentuated by the simple sounds – the corn waving in the wind, birdsong etc..  This was one of the best parts of the day. Later in the day, I would seek the company of other pilgrims but I loved to be alone in the early mornings.

It was a time for reflection, thought and prayer and of marveling at Nature.  The silence, the solitude were so novel because it is something very hard to experience in Malta.

Adapting to the daily discipline of rising early, putting on your boots and walking – irrespective of the blisters or sore muscles – was, at times, hard but most rewarding in the long run. 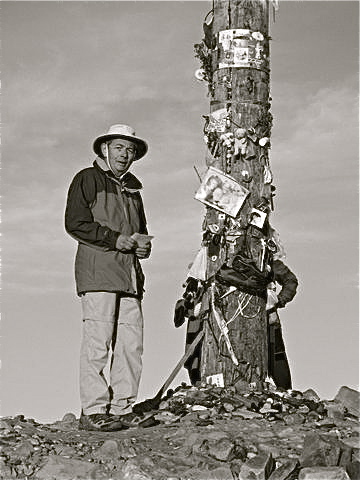 Atop Montes de Leon at its highest point. The Cruz de Ferro is an iron cross where every pilgrim deposits a stone © Stephen Mangion

In the silence do you find that you notice more about your  inner world (emotions, thoughts) or conversely become more attuned to the details of the outer world (nature), or both?

I found that both happened: there were large swathes of time when one was in one’s inner world  – a kind of mobile meditation – and yet always conscious of the nature surrounding one.  At other times, one was so totally immersed in the nature around one that there was no thought at all.

It is a very physical journey, please tell a bit about the fatigue or pain you feel and how it evolves and changes as you push on.

Day One was the hardest with the climb over the Pyrenees although there were other very tough days such as the other mountain climbs and the long, punishing walks through the hot, dry Meseta.  I developed blisters after nine days’ walking (which is pretty good going) and they only lasted for a few days.  I also tore some ligaments in my calf muscle but a visit to a masseuse and a physiotherapist helped me to overcome this.  There were times when you really had to push yourself to go on, especially towards the end of the day when you still had a long way to walk but feeling very tired and hungry.

When you return to civilization, what is the most jarring aspect of the return, and also the most comforting?  Also please tell us what you miss most/miss least about ‘regular’ life when you are away on the pilgrimage.

When I got to Santiago I had booked into the 5 star Parador hotel.  On the one hand it was comfortable to sleep in a comfortable bed, to have nice bathroom to use, to have a good breakfast but, at the same time, it didn’t feel quite right.  I became aware that the sense of luxury was really not giving me any pleasure – maybe quite the opposite – and I started to miss the companionship and camaraderie, the peace and the sense of purpose that one experienced on the Camino.  On the whole, I really missed the life on the Camino when I went back to “real” life. 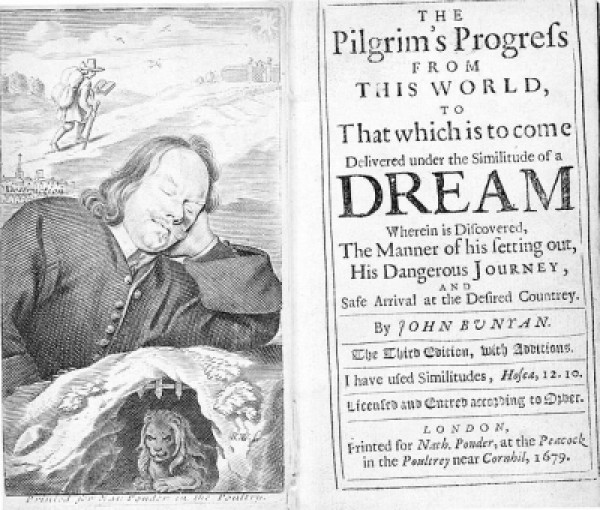 Do you sleep better or worse while on pilgrimage? Were your dreams more vivid, or less so?

A very mixed bag here!  Some nights were really bad: when you are sleeping in a dormitory with 50 or 60 people most of whom are snoring etc…it is very hard to fall asleep.  At the same time, after a hard day walking one is so tired that one can sleep very deeply.  I cannot honestly say there was any difference in my dreams – at least the ones one experiences while sleeping.  As far as the day dreams are concerned, I would say it is a lot more vivid with all the various experiences one has every day.

You are an architect, would you recommend this journey to creative people?

I certainly would!  There is great architecture and art all along the way: from the great Gothic cathedrals of Burgos and Leon, the wonderful Romanesque churches, the Gaudi buildings in Astorga and Leon, the picturesque villages.  The fact that one is seeing the country at walking pace – as opposed to driving or using a train  – means that you can take in so much more of it.  Indeed, traveling at this pace makes the world of difference in terms of the experience, the amount of detail one retains.

What is the most important thing you learned from this journey?

I would say perseverance was certainly one.  To overcome the physical difficulty one has to have perseverance.  There were times – notably on the very difficult day one, I felt on the point of giving up but I did not.

Other things I learned were:

-To do things your own way and take them at your own pace – not to try to follow others
-Take things a step at a time.  That way, even the most daunting undertaking can be manageable
-Savour the moment
-A prolonged period of peace is like balm for the soul
-Take things as they come/resignation

There is also a great feeling of camaraderie and spirituality (not necessarily religiosity) about the Camino which really affects one.

To watch the trailer for the film “The Way”, please click: HERE. 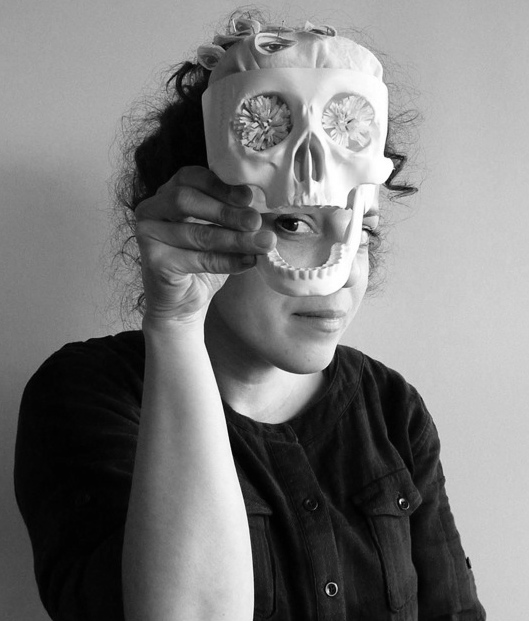 LYNDIE DOURTHE: Of a curious nature 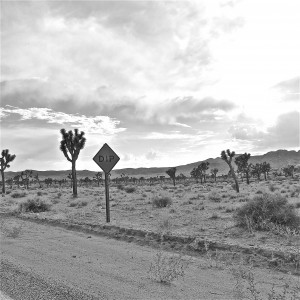