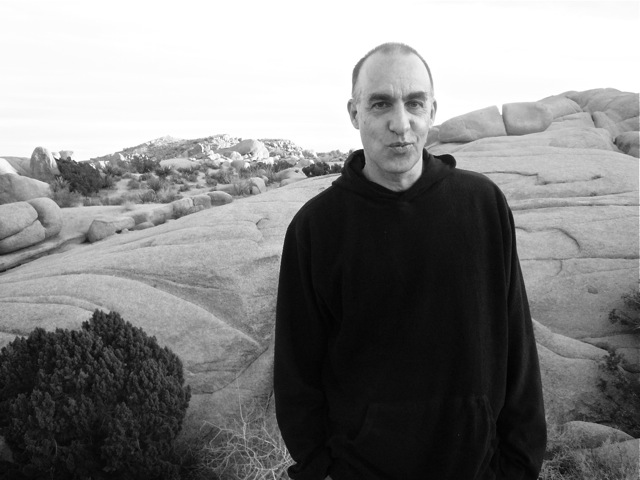 JOHN LURIE is an actor, musician, painter, director and producer. He is co-founder of  the seminal and widely revered jazz/punk band The Lounge Lizards. John has acted in numerous films including Jim Jarmusch’s Stranger than Paradise and Down by Law. For five years he appeared in the HBO television show Oz. In 1991, he produced and starred in the television series Fishing with John. John has also composed and performed music for numerous film and television projects. In 1996, his soundtrack for the film Get Shorty was nominated for a Grammy Award. In 1999, listeners discovered the posthumous works of The Legendary Marvin Pontiac–Greatest Hits. Pontiac, however, did not exist; his biography, music and the lore that surrounded him was entirely imagined & created by John. Renaissance man, rebel, John is a profound and radiant talent. In this interview, we focus on his extraordinary painting. 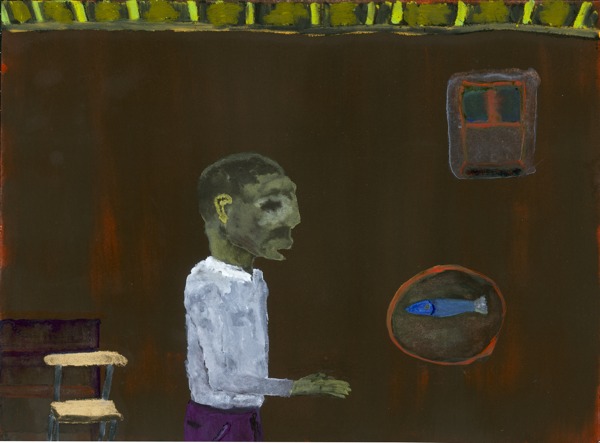 YOUR MOTHER WAS AN ARTIST, WERE YOU A CREATIVE CHILD? WHAT IS YOUR EARLIEST MEMORY INVOLVING YOUR OWN CREATIVE EXPRESSION?

This isn’t really a memory. When I was in my early twenties my sister told me about a painting I did when I was around 4. She still has it I think.  Written on it is – I am thankful for my skeleton, my brain and the sun.

It is stunning and looks incredibly like what I am trying to do now.

I was talking with my brother Evan the other day about this – about somehow my parents allowed us to have an artistic freedom that lasted into adulthood. We don’t really know how they did it. My mother taught art at a college in Liverpool. Still I can’t really imagine that they helped their students hold onto a childlike like thing in their work. My paintings really do have a direct line from what I was doing when I was 2 years old to now.

YOUR PAINTINGS ARE WILDLY IMAGINATIVE, SUGGESTING A RICH INNER LANDSCAPE.  HOW DO YOU APPROACH THE CREATION OF A NEW PAINTING? DO YOU HAVE A RITUAL TO ACCESS YOUR IMAGINATION AND CREATIVITY?

Thanks. No, I don’t have a ritual. Maybe I should have one. I find that the work comes out best when I am compelled to do it. If I make myself get up and work it usually doesn’t go well and I can often screw up a painting that was going pretty well.

Normally, I just have a combination of colors in my head and plop them down and then see what I have. 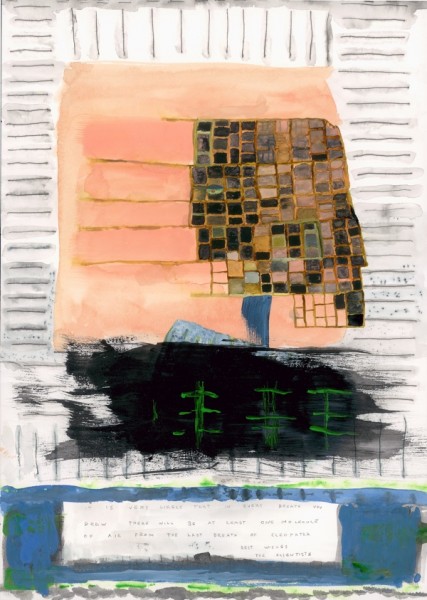 WHEN I LISTEN TO YOU PLAYING SAXOPHONE, I GET THE SAME FEELING I GET WHEN I LOOK AT YOUR PAINTINGS: I SEE YOUR ʻINSIDEʼ RADIATING OUTWARD. WHAT DO YOU FEEL/EXPERIENCE WHEN YOU ARE CREATING?

Oh that’s good. I am glad that is seeable.

I have Lyme disease and so one thing that happens is that when I am painting the symptoms subside. Sometimes if I work too long, I can feel that I am going to pay for it later, but it seems important to continue. Somehow like the naïve idiot that I am – I think the work is important.

I don’t know what I feel or experience. When it is going well – time just vanishes. I will think it has been 10 minutes and two hours will have gone by. It is almost like you disappear.

Something similar to this used to happen with music. I would get off stage and the only things my conscious mind would remember were the mistakes. The train wrecks or when the bass player came in too fast on the third section. I would be really upset about how we had played.

Then I would listen to a tape of the concert later, and go – “this is good. This doesn’t suck at all. This is good.”

But I didn’t remember the parts where it flowed out because I had disappeared. 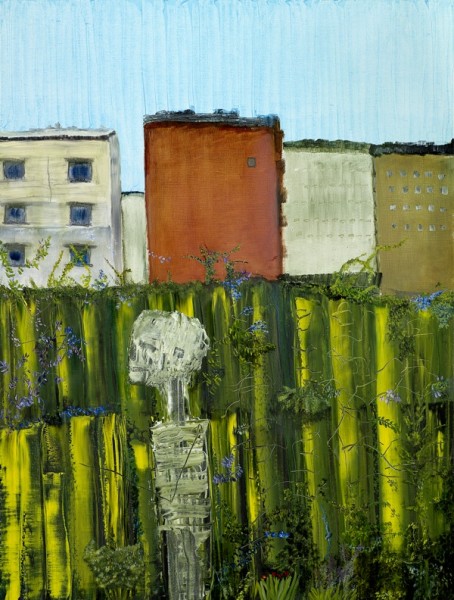 I am thankful for my skeleton. He is still in the garden. © John Lurie

THE TITLES OF YOUR PAINTINGS REMIND ME OF THAT FAMOUS HEMINGWAY BET IN WHICH HE SAID HE COULD CRAFT AN ENTIRE HEARTBREAKING STORY IS 6 WORDS, HIS EFFORT: “FOR SALE: BABY SHOES. NEVER WORN.” TELL US ABOUT HOW THE RELATIONSHIP BETWEEN TEXT AND IMAGE WORKS FOR YOU:

I never start out with the text or title in mind. I work for a while and see what I have. I used to write on all the paintings but I do it less now.

THOUGH YOU WERE KNOWN FOR YOUR MUSIC AND ACTING FIRST, YOU HAVE BEEN PAINTING FOR DECADES. WHEN YOU LOOK BACK AT THE EVOLUTION OF YOUR PAINTINGS, WHAT DO YOU SEE? HOW HAVE THEY EVOLVED OVER THE YEARS? WHAT FACTORS MOST CONTRIBUTED TO YOUR GROWTH AS A PAINTER?

It’s funny how it works – say one out of ten of the old ones are really good. As your technique improves you lose something as well.

When I switched to oils a few years ago, it really helped when I went back to watercolors. I am not sure why. Perhaps it is simply that you have to concentrate a little more with oils because the messes aren’t as appealing.

With watercolor – the running of the colors, the water, can often be quite amazing. Better than anything you can do on purpose or even think of.

I didn’t really answer the question did I? Oh well. 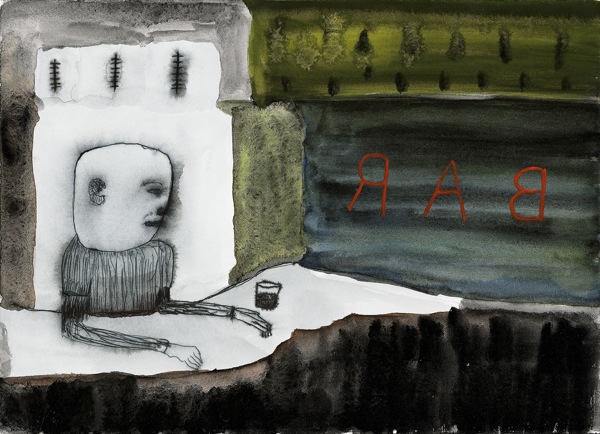 IS THERE ANY PARTICULAR BOOK OR TEXT THAT HAS HAD A PROFOUND IMPACT ON YOU? DO YOU HAVE A MENTOR? OR A MUSE?  OR BOTH?

No mentor. Nesrin has a lot to do with my output in the last few years.

I couldn’t have done a lot of this without her. (Ed.note: Nesrin is John’s assistant)

Every time I see anything written by Lao Tzu – I find it pretty profound and correct.

My obsession for a while now has been how to fix a horrible article in New Yorker magazine. The article was rife with misquotes and sheets of disparaging inaccurate information. It bothers me a great deal and because of the subject matter, it will probably bother me for the rest of my life.

ANY WORDS OF ADVICE YOUʼD LIKE TO SHARE FOR THOSE INITIALLY EMBARKING ON THEIR OWN CREATIVE JOURNEY?

Yes – don’t listen to anyone. Find what is in you. 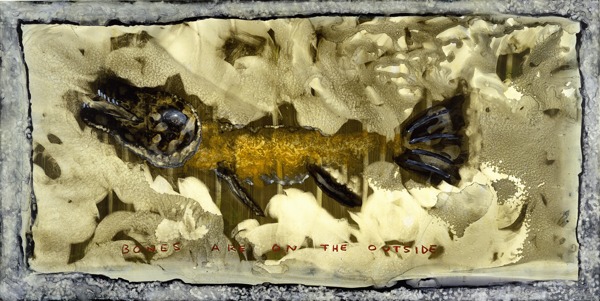 Bones are on the outside. © John Lurie

TELL US ONE THING ABOUT YOURSELF THAT WOULD SURPRISE US

I hold the world record in the high jump. 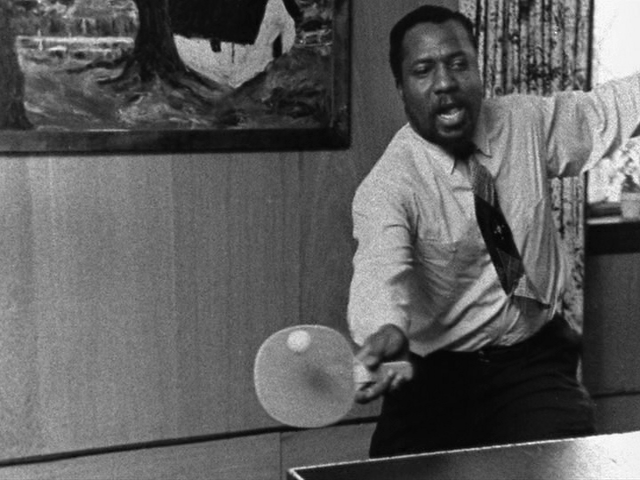 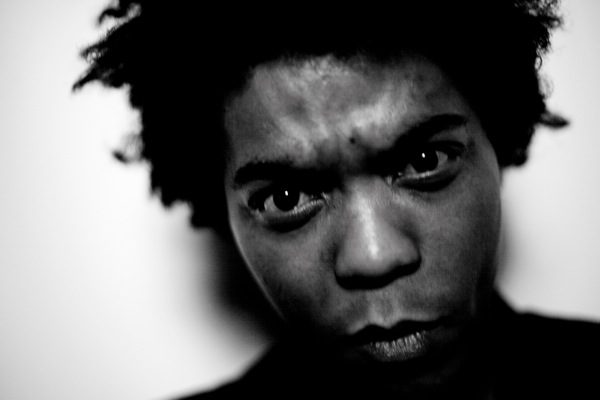